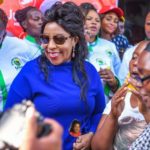 Agnes Kagure could relinquish her bid to become the next Nairobi governor in favour of another political seat in the county. Nairobi News has established the city businesswoman who was in the running to replace Ann Kananu is re-thinking his options in the wake of stiff competition from her opponents and not so impressive poll ratings. There is also the issue of finances, with the governorship campaigns attracting a heft war chest, to the tune of hundreds of millions of shillings in branding and facilitation. Kagure, according to sources, could strike a post-election deal with Azimio leader Raila Odinga to wait for nomination for a parliamentary or Senator seat, or even go for a ward seat. “The ward seat will aid her to get the Majority leader in the County assembly which is an influential position,” a source explained. “The influence in the position was realised when Abdi Guyo was in charge of the Assembly matters.” Guyo has since trained his sights on contesting for the Embakasi Central parliamentary seat. Among those contesting for the gubernatorial position is Kenya National Chamber of Commerce and Industry boss Richard Ngatia who is said to have the ear of both Raila Odinga and President Uhuru Kenyatta. Ngatia who returned from the United Kingdom and picked his nomination papers from the Jubilee party this past week has also enjoyed impressive ratings in the past few weeks. Ngatia is set to battle Nairobi Senator Johnson Sakaja, seasoned politician Margaret Wanjiru and Westlands lawmaker Tim Wanyonyi.