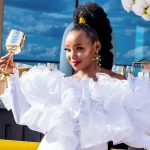 Actress Catherine Kamau has bagged another big award at the recently concluded Women in Film Awards (WIFA) which took place at the Kenya National Theatre, Nairobi. The third edition of this award featured many great female talents in the Kenyan film industry. Kamau, commonly known as Kate actress, and Jackie Matubia were among the biggest winners on the night, as they both were recognized for their roles in their respective drama series. ⁣ Kate took home the award for the best actress in Film for her role in Nafsi – a romantic drama feature film, directed by Ruben Odinga, whereas Matubia was crowned best actress in TV drama following her role in Citizen TV’s telenovela Zora.⁣ “When I took on the role of Shiku on #Nafsi, I was looking for growth as an actor, to push the envelope, this is a confirmation that I am on the right path,” explained Kate. “I would like to thank each and every one of you who took time and voted for me⁣. Nana was a role I loved and acting is my everything. Thank you, my people,” wrote Matubia. on her socials. The Women in Film Awards (WiFA) aims at bringing women filmmakers in Kenya together and provide a space where a diversity of women’s voices, stories, and creativity is equally recognized and celebrated.⁣ Kate has made a name for herself in the Kenyan film industry as a multi-award-winning actress. Last year, the actress won Best Supporting Actress In A Film at the Kalasha International Film & TV Awards.