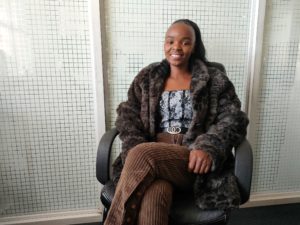 Moureen Mugurem popularly known as Morin actress, has been showing how typical African mothers react to tattoos, early pregnancies, scanty dressing, waking up late among a myriad of other life happenings. Through her mama Morin skits, the 21-year-old says the way her mother reacted when she was growing up is what she shows to the world. “Except comic effects and exaggerations, almost all my videos are what I experienced when growing up. My mother’s reaction then sums to 95%,” she reveals. While celebrating her mother’s support, she admits sometimes her mother gives her lines to add while shooting videos. The comedian whose talent thrived while in high school and elevated on the radar as a result says that online comedy should be relatable for an artist to thrive. Owing that it is the easy type of content creation for a talented person, Moureen adds that the transition from stand-up comedy to online comedy has made many artists showcase their talents easily. Having started the mama Morin skits in 2021, the mother of one discloses passion has been the grease that has sustained the wheels of her comedy. “Passion and consistency are very key. Do what you like and love what you do then the fruits of your labor will be evident. I do laugh at my skits,” she says. Additionally, the Hospitality and Tourism Management diploma holder states that currently, her full-time job is acting and she has received a couple of endorsements from different companies as a result. “The first month’s comedy was not paying but also I was not focusing on the endorsements as much as growing my art,” she says. Moreen also divulges that parenting and acting is a tough combination but determination, hard work and peace of mind makes it a little easier. “While she (her baby) is asleep I get into character and produce something. At times when she sees me getting ready and passes on other acting accessories that I use,” she proudly reveals. Grateful of the feedback her videos generate, Moreen adds that most of her fans give her suggestions on what to improve on or videos she needs to make. “Since the content I create comes from what most Kenyans went through while growing up or still go through, it is easy for me to create content.”