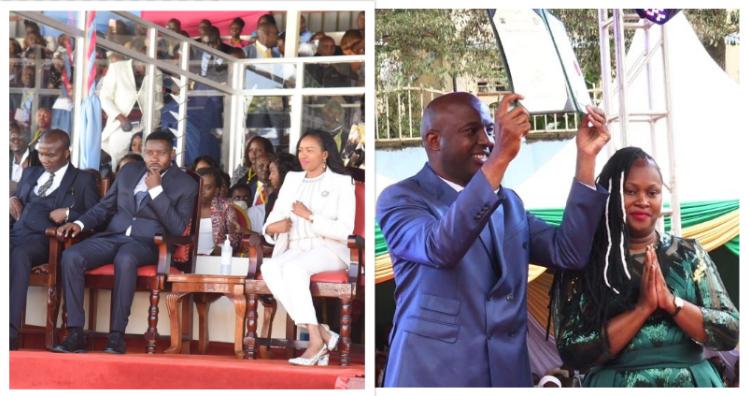 The swearing-in ceremonies of the newly elected governors were all family affairs with several county bosses being accompanied by their spouses and others by their children while taking the oath of office.

Below are the county bosses who graced the carpets with their families:

Sakaja looked suave and svelte in a navy blue suit and a red tie while his sons wore a three-piece suit and a black tie, for his swearing-in ceremony.

His daughter who stole the show was in a baby pink princess dress.

His wife also accompanied him as he made his maiden speech after being sworn in as the Nairobi governor.

Susan Kihika graced the red carpets with her husband Sam Mburu and her daughter. She was dressed in a white suit.

Kihika who is now the Nakuru Governor previously served as the senator of the county in 2017.

Orengo served in the Senate of Kenya since 2013 as a senator for Siaya County.

In 2022 he vied for the governor of Siaya County and won.

Orengo attended the inauguration with his lovely wife Betty Murungi. They are both lawyers who have been practising law for a long time.

Meru Governor Kawira Mwangaza was at the Kinoru Stadium with his husband Nurega Baicu. He entertained residents of Meru who attended the ceremony with his guitar.

Kawira won the seat running on an independent ticket.

With little known about him, the former banker was elected as the Elgeyo Marakwet county boss.

Wisley is the youngest Governor serving in 2022. He attended his big day with his wife, Fionnah.

He is the Former Labour Administrative Secretary.

Lamu Governor Issa Abdallah Timamy and his wife Hajar al Busaidy recaptured his seat after he lost it back in 2017.

His loss at the general election was following reports linking him to terrorism.

A lawyer by training, before his election, he served as the chairman of the National Museums of Kenya.

Kwale Governor Fatuma Achani and her husband Ali Kanga were at the Kwale stadium where she was sworn in as the first female coastal Governor.

Before being elected Governor, he served as the Chuka/Igambang’ombe Member of Parliament.

Murang’a county governor Irungu Kang’ata proudly held aloft his inauguration certificate moments after receiving it after he was sworn in at Ihura stadium.

He becomes the second governor of Murang’a county since devolution.

His wife, Mary Wambui, was by his side to celebrate the moment with him.

Photos: Inside an illegal distillery in Athi River

What a father! Governor Sakaja shows up with his kids for the swearing-in ceremony